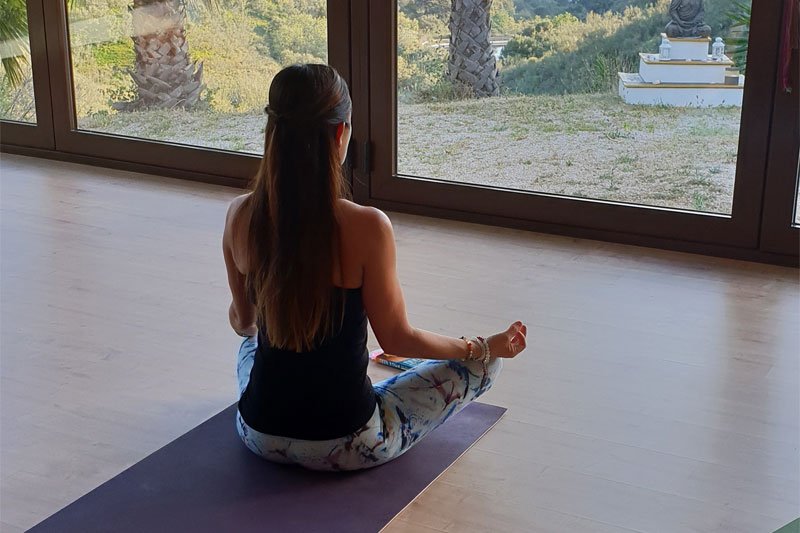 Yoga Nidra which is derived from Tantras, is a powerful technique in which you learn to relax consciously. It is one of the deepest of all meditations. Yoga Nidra means yogic sleep. In meditation you remain in the waking state of consciousness and gently focus the mind, while allowing thought patterns, emotions, sensations and images to arise and go on. However in Yoga Nidra, you leave the waking state, and go to deep sleep, yet remain awake.

Most people think that relaxation is simply reclining and closing your eyes. When you are tired you simply go to bed. But unless you are free from muscular, mental and emotional tensions, you are never relaxed. That is the reason why many of us wake up with a feeling of fatique, restlessness and inadequate rest. In order to relax completely, the inner tensions, emotions and mind must be released, this complete state of relaxation can be achieved through Yoga Nidra.

In the Yoga Nidra state, the mind is exceptionally receptive. Languages and other subjects can be learned rapidly.

Who Carried out many experiments to validate this.

One was with a little boy who presented himself at Swami’s ashram. He was a very naughty boy, all day long he broke things, harassed visitors and caused accidents. Finally he became such a liability for the ashram that he decided to try Yoga Nidra on him. He began chanting the 15th chapter of the Gita to him about three minutes after he had fallen asleep. Then when he woke in the morning, he would get him to read through the chapter, which he would do mindlessly. After one week he was able to recite the whole chapter by heart. When this succeeded Swami went ahead with other texts, and managed to teach him Upanishads, Bible, Koran, English, Hindi, Sanskrit, all that Swami knew while the boy was asleep. Now that boy is 21 years old and lives in the USA, where he speaks 11 languages, and writes and lectures in English, yet he has never been to school. All of his studies and learning took place within that 2 year period where he received Yoga Nidra, and he does not even remember it!

During Yoga Nidra the consciousness is in a state between waking and sleeping, but it is subject to neither. Suggestions given at this time are successful in removing unwanted habits and tendencies. In fact Yoga Nidra can be used for directing the mind to accomplish anything. The intuitions received in Yoga Nidra enable one to find within himself the answers to all problems. This is the opening of the third eye.

The International problem today is tension, hypertension, total tension, if you know how to free yourself of tension you know how to solve your problems in life. Many people now suffer from stress related diseases, leading to nervous depletion and breakdown. If you are able to balance your tensions, you can control your emotions, anger and passions. You can then control many diseases and problems. If the mind is tense, the stomach will be tense, and if the stomach is tense, the whole circulatory system is tense. It is a vicious circle of events. In yoga nidra the psychosomatic imbalance is restored due to liberation of prana or nervous energy, this energy is redirected for healing and rejuvenation of overworked tissues, glands and organs.

In Yoga Nidra we make a Sankalpa or Resolve. Anything in life can fail you, but not the Sankalpa made during yoga nidra. If you know what you want to achieve in life, sankalpa can be the creator of your destiny. The resolve is made at the beginning and end of the practice. The beginning is like sowing a seed and the end is like irrigating it. If you prepare the mind and sow the seed properly, then it will grow in your life and become a powerful directive.

Yoga Nidra generally lasts for 40/45 minutes. Yoga Nidra is performed in Shavasana. Once you have chosen your resolve, then rotation of consciousness is performed through different parts of the body. During practice there are only three requirements to be fulfilled, remain aware (awake), listen to the voice and move the mind rapidly according to the instructions. After rotation of consciousness have been completed, physical relaxation is then continued by drawing attention to the breath. Next comes relaxation on the plane of feelings and emotions. Usually this is practiced with pairs of opposite feelings, such as heat and cold, heaviness and lightness. The pairing of feelings in yoga nidra harmonizes the opposite hemispheres of the brain and helps in balancing our basic drives and controlling functions that are normally unconscious. The last stage of yoga nidra induces mental relaxation, in this part of the practice, the student visualizes the images named and described by the instructor. Since the images that are used often have universal significance and powerful associations, they can bring the hidden contents of the deep unconscious into the conscious mind. The visualization practice is usually finished with an image that evokes profound feelings of peace and calmness. This makes the unconscious mind very receptive to positive thoughts and suggestions. The practice of yoga nidra ends with a repeat of the resolve, this direct order from the conscious mind to the unconscious is the seed enabling us to radically change our attitude, behaviour and destiny.